New clients are often confused about terminology around the word “custody.”   That’s because, in the legal world, there are two different kinds.

I hope this clarifies your understanding of the various types of custody. 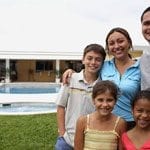